Time for something a little different, methinks.

The Dovi saga is still unfolding, with many ups and downs, incredible incidents of Divine Providence, better days and harder days, but thank G-d, things are basically stable at the moment. Dovi is doing well in school, Little Levi is growing by leaps and bounds, and of course, I'm always busy, around the clock, seeing to Dovi's needs and resources and programs and such. Currently, I'm involved in a dozen different projects that revolve around Dovi; setting up a picture communication system, getting him the SPIO vest, organizing SibShops for Yiddish-speaking boys in my area, trying to find a transportation para for Dovi, since the new matron cannot handle him on the bus (we miss the old one :-( ), working along with the Behavior Therapist that will come to our home twice a week for the next few months, and of course, every Sunday is a whole new chapter, lining up all of the people involved in Dovi's care on Sundays - the driver who brings him back from his respite program, the 2 community hab workers (who keep canceling on me) , and so on and so forth, ad infinitum. Being an unpaid Child Advocate for someone as severely behavioral as Dovi is a constant challenge. Keeps me on my toes, big time.

But in terms of Amazon products, I haven't bought much for him the past few months, aside from he usual repeats of the diapers, pullups, a dvd player, backpack harness, slinkies, light up toys, balloons, etc. On the other hand, with a new baby I've been pulling out baby related items from storage and buying more. So I am excited to share with you what products have been working for me. Perhaps someone googling "Baby Swing" or "Exersaucer" will chance along this post and click on a product and end up buying something and I'll have some more Amazon commission to then spend on Dovi's amazon products.... and so it goes in a circle :).

So if this post does not concern you, you can move right on past and continue waiting patiently for the day that my writer's block will lift and my ADD-induced fuzziness lifts, and the constant rollercoaster that is Dovi's resources and arrangements eases up a bit and I can finally fill in those blanks between last May and now, which I know you're patiently waiting for.

But for now, here's my Baby Gear review.


First of all, Baby Levi's car seat is brand new; we opted for the Graco Snugride Car Seat.  We rarely use it around the house - usually he's in the swing or Exersaucer - but it's perfect for car rides (not that he's in a car all that much....) I highly recommend it,  it' affordable and serves the purpose.


As for his stroller, contrary to the Brooklyn stereotype, I opted NOT to get the Bugabee. Instead I got the Mamas & Papas Urbo, which is a little cheaper than the Bugabee (I paid $489 I believe). It's sturdy, comfortable, easy to push, and compact. I love it. It's a lot stronger than the Bugabee too.


When Chaim was born, I received a Fisher Price Takealong swing as a gift. It was indispensable. When Dovi was born, I bought the updated and improved version. Today, they don't really make them anymore, and it's a pity because they are really good. So we ended up using BOTH, as they are both on their last legs in different ways and have different useful features... So I use the original swing for the accessibility of the animal toys and the Aquarium one for the music and lights. Levi is outgrowing them; he arches his back and tries to wiggle out of them if he's not strapped in... so they might both end up in the garbage very soon, as I think if I ever have another baby i'll splurge on a new bouncer or something like that.... (we never turn on the swing mechanism, I use it as an infant seat for the baby to lay around in.) Anyway here is a photo of the car seat and ready-for-the-garbage swings, with a link to the only similar item I found on Amazon, a space saver swing. 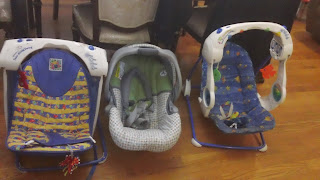 Next: B"H nursing is going surprisingly well (I had thought with Dovi around it would be impossible, but thanks to having our amazing aide around almost all the time that Dovi is home - except for mornings, but his bus comes pretty early) I am still going strong, at 5 months. My Brest Friend pillow is something I used even with Chaim (who was bottlefed) as well as with Dovi, and now I use it less, but it's still very useful if I'm not on the couch or bed and want to be somewhat handsfree.

Before Levi was born, I was very nervous how I would be able to take care of Dovi and Levi at the same time, especially if Levi needed to be held while Dovi needed to be watched over. So I researched baby carriers and after a lot of research decided on the Baby Ktan. Turns out, once again, that we have our incredible aide (I forgot what name I assigned to her - Charlene? Sheila? Something like that....), plus Levi is, bli ayin hora, a really well behaved baby and hardly ever needed to be held excessively even as an infant. Nevertheless the carrier came in pretty handy when Levi was an infant - it helped calm him, he fell asleep often in it, and it was great in the early days when I had to transport Dovi to his summer respite program and I didnt have a double stroller, or for a quick grocery dash when I wasn in the mood to shlep out the stroller for the baby. At this point, he spends a lot of time in the Jump n Bounce or Exersaucer, or on the floor with toys, plus he is quite the chunker (17 pounds at 5 months bli ayin hora!) so I don't wear him very often. But I totally recommend the Baby Ktan as the carrier of choice. It's insanely easy to put on, and it doesnt strain your back. The customer service I received from that company was incredible as well; help with sizing, returns, etc.


Now on to Baby Levi's "toys". I have to say the TinyLove company has the most incredible stuff. Most of these things I still have from Chaim and they are really durable and long lasting. (I did have to buy a new mobile for the crib, because Chaim kind of broke it - not as a baby, but now as an 8 year old :) ) We also have an arch of hanging toys for the crib (I dont see it in Amazon - probably discontinued - ) and a takelong musical mobile for the stroller ( dont see it on amazon either). I really like the crib mobile I have for him, and it's really cheap right now on Amazon. It lights up, sings soothing songs, and all that jazz.

Levi is old enough now to spend some time upright, and he has learned to LOVE to bounce on his feet! So he spends some time 'dangling' :) in the Jump n Go, and some time in the Exersaucer, when he's not in the crib or on the floor. Other times, he's in the Bumbo chair. Levi absolutely adores his big brother Chaim, and he waits for him to come home from school every day. Chaim's friends come over, and Levi loves to bounce up and down in the doorway watching them play, while they entertain him or sing to him. (He keeps trying to make eye contact with Dovi, and is puzzled that there is no reciprocation. Dovi has an interesting respect for him; thank G-d he does NOT hurt him, which is something parents of autistic kids worry about all the time; he doesnt climb into his crib or anything like that. If Levi is asleep in my bedroom, Dovi will go inside, and then leave - he will not wake him. I'm quite lucky in that regard BH.) Levi also enjoys watching our cleaner go from room to room and sing to him as well. When no one is in the area of the house where the bedroom are, Levi will bounce in the exersaucer and even look out the large picture window of the dining room, or be in the kitchen and watch me cook. I actually bought the exersaucer very cheaply at Walmart.com. The Jump n Go is very supportive, and I like the musical toy in the front. By 4 months old Levi was already playing with that toy, learning to pull at the handle and move the beads.

So here are baby Levi's favorite places to hang out:

And don't worry about his time spent upright hindering his development - he has a Gymini too - and he has just started rolling over! :)

Bath Seat: At first I would bathe Levi in the kitchen sink, but since he's B"h growing really quickly, he soon outgrew it. I saw this bath seat at my neighbor's house and I bought one too. It serves the purpose; I dont love bath seats because the water level needs to be really high for them to enjoy the water, but then their body isnt even immersed in the water. So I end up using the bath seat for the first few minutes, so I can bathe him, and then take him off, hold him in my arms for a few minutes while he splashes to his heart's content (all my kids LOVE being bathed!!!) and take him out....

My mother bought these cute rattles for Levi as a Chanukah gift. I'm surprised how this simple, cheap purchase is the biggest hit -- theyre easy to hold and a great teething ring too!

Finally, Levi has a great crib activity center which I originally bought as a tabletop toy for Dovi, but it ended up doubling as a crib toy for Levi as well. I dont remember the company name and don't want to bother sleeping Levi now, so I'll post the link to that another time. If anyone wants further info on any of these baby items feel free to ask me! Hope you're all having a great holiday week! 'til next time, Dovi's Mom (and Chaim's, and Levi's, too! BH)
at 6:43 PM