This is one topic you probably do not want to read about.

The topic I am going to discuss now is very unappealing, unappetizing, and downright disgusting. It is, however, a very necessary topic for parents of autistic children, and of other intellectual disabilities and intense sensory issues. It's something I had to contend with for a while until I finally found the solution and I am eager to share it with others. If you are not dealing with this yourself, you might just want to skip it over, for as I said, it's unappealing, unappetizing, and downright disgusting.

When Dovi was first diagnosed and I was talking about it with some of my fellow special needs moms, I kept hearing how lucky I was that Dovi did not engage in the biggest nightmare for autism parents: Fecal Smearing. Dovi had no interest in the contents of his diaper, and although he occasionally did make a mess of things if he happened to poop on the floor or bathtub, it wasn't a regular habit and I didn't worry about it.

Until the day came when it became a fairly regular habit.


Having a dirty diaper is a very uncomfortable sensation, and for a verbal child who is not fully toilet trained, all it takes is wailing in the crib and crying for Mama for the child to get changed. With Dovi, as with many other autistic, non-verbal, or intellectually/cognitively challenged children, they have no way of indicating that they need a diaper change. They also like smearing stuff - be it cereal, play dough, or chocolate pudding. So if their diaper is bothersome and they take it off and find something smearable... well, they finger paint.

Dovi often woke up at an extremely early hour, and I wasn't ready to have him wreck the house at the crack of dawn when I still needed my sleep. I would simply slip a bottle of juice into his crib and put on a music cd so he would stay in his crib for another hour. During that time, he often did his business, and when I came back to his room I often found him undressed from the waist down, the contents of his diaper everywhere  - the crib, his legs, his hair, his face, his mouth! UGH! Sometimes he did in the evening; I always knew to be a little suspicious if he wasn't asleep within half an hour. A visit to his room very often greeted me with the above scenario. And cleaning it up is not fun.

However, at first I didn't do anything about it. I was resigned to the reality that it's part and parcel of raising a child with autism and learned to accept the Poopie Picassos without blowing my top. Dovi would get deposited into the bath and scrubbed down, and while he played in the bath I quickly changed the bedding and disinfected the crib. It happened on a regular basis, several times a week. Sure, I read about all sorts of ideas; taping the diaper down, large sized onesies, one-piece pajamas put on backwards. I didn't bother, however; I liked Dovi's cute 2 piece pajamas and wasn't going to invest in a whole bunch of fleece footie pajamas.

Until the day I got the call from the Respite House during Dovi's third stay there. He had, apparently, smeared his diaper all over the crib, and that was a Respite House no-no. I protested feebly and was told I had to employ the tactic they advised other smearers: One piece sleeper pajamas, feet cut off, zipper in the back. I dug out a few old Childrens Place fleece sleeping-bag pajamas, cut off the feet, and that became Dovi's choice of sleepwear for Shabbosim at the Respite House. At home, I continued using his cute, regular pajamas, and continued resignedly cleaning up his crib week after week.

When Dovi outgrew his crib and began sleeping in the Ready Set Bloom tent, fecal smearing became a bigger issue; it's not easy to dismantle and wash the large tent, and it kept happening. I ordered a second tent so we could alternate, but there had to be a better solution. My tolerance hit the roof - or you can say, the poop finally hit the fan - when on the morning of Hurricane Sandy, when there was no school, Dovi did a masterful paint job which left the tent so severely grossly defaced, which I couldn't even sanitize since he was running around the house creating a mess. I was near tears.

Something had to give. Clearly, the days of cute velour 2 piece pajamas were now over.

. I purchased a few, cut off the feet, and put them on backwards. However, Dovi felt very hot and stifled in them, since they tend to be made of microfleece. Dovi's room is very warm in the winter, and I worried what would happen in the spring and summer, when cotton pajamas were called for.

Enter the Little Keeper Sleepers. Someone on Facebook gave me the link. At first I was reluctant to spend that much money on a sleeper. I soon discovered it was worth every cent. The pajamas are cute, comfortable, impossible to open, and simply a lifesaver. Since the day we bought the first one, we have not had any incidents of fecal smearing. By now we own five of these pajamas; 2 in solid green, 2 in blue stripes, and 1 in green stripes. And Dovi looks cute in them :). 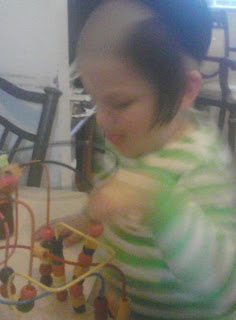 The Little Sleeper Keepers only go up to a certain size, so I was pleased to stumble on another company who makes them in much larger sizes.

I hope this post will help those of you struggling with this issue. It's one of the most unpleasant things a parent of a disabled child - or adult- has to contend with. I really, really hope Dovi can be toilet trained within the next year or two. They tried this year at TABAC but had to stop in the middle; hopefully School C can see it through at some point, for it's a really big priority for me.


ETA: The Little Keeper Sleepers currently go up to size 18 and come in a variety of colors. You can find some of them on amazon as well. Here are some similar types of pajamas you can get on amazon. Though I recommend you check out LIttle Keeper Sleeper's web site.