A Funny Thing Happened in Fallsburg

One of the difficulties in writing this blog is that despite this being in 'chronological order', I sometimes skip ahead and back, since the posts are sometimes separate topics. So although I already wrote about Dovi's upsherin, I'm going to step back to a week or two before his upsherin to tell you a really fascinating little story.

Although we were staying home for the summer so that Dovi could start attending the ABA center - and of course, due to our exciting upcoming move - we did try to make some vacation plans. We had our minds open to finding a place for the last 2 weeks of August, since the ABA center was closed then, as well as for the first long July weekend, as both Dovi and Chaim had a couple of days off.

We first tried a summer camp that was offering bungalows for the first weekend, but that didn't work out. At the very last minute, on Thursday morning, we called a different place, which sounded even better than the first place.

Dovi lived it up in the hotel/motel. He loved the grass, the fresh air, the pool, the swings - the whole works. This kid thrives in suburbia. He makes more social progress in the summer in the great outdoors than he does all year long. As you will see later, when I will write about our August vacation, his next big social breakthrough came during those admittedly very difficult weeks (I was basically solely in charge of him and it was murderously difficult).

It turned out that the accommodations were very blah and the food even blaher. But it was a fantastic weekend; we were refreshed, rejuvenated, and relaxed. There was nothing like escaping from the stress of the pre-upsherin and pre-move chaos and spending some family time together among the grass and trees and - best of all, the great company. On my old block I was very socially isolated and one of the reasons I look forward to summering upstate is the social circles and chatter.

Here are two pics of the boys living it up that weekend, and after the pictures I have to tell you an incredible story that occurred over that weekend. 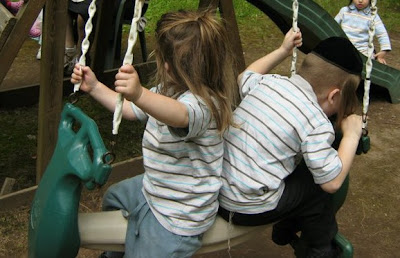 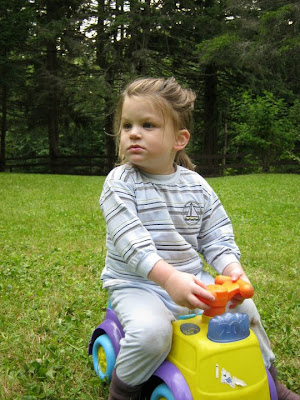 So here's the amazing story.

The entire Shabbos of our stay, I spoke about Dovi a lot. He was obviously not acting like an almost-3-year-old would; he ran away constantly, lay on the grass, ate grass, and so forth. So I explained his background and caught them up on the present. The circle was a very sweet group of chasidishe women. The majority of them were from Boro Park; basically none of them knew me personally. I really enjoyed myself. I told them about Dovi's entire journey; how he was a beautiful, precocious child; his regression; the struggles with ECC and TABAC; my struggles with the loss, grief and acceptance, and so on. I got lots of sympathy, questions, suggestions, and so forth.

There was one woman in the group who looked a little different than everyone; her headcovering was slightly different than most, which basically meant she was from a slightly different community. She looked to be very intelligent but she kept completely to herself. She nodded to me once or twice in greeting, but that was it. She had a very long, difficult-to-pronounce name, one which I had never really heard - let's say something like Fliegenstockenstein. She had very sweet preteen boys who spoke in Yiddish with a pronounced Boro Park accent. They were very intelligent and I enjoyed listening to them talking with other boys from a similar background who were at the hotel for Shabbos.

Towards late afternoon I was out with Dovi at the swings, and so were the Fliegenstockenstein boys, talking to those other boys. Other Boy said wistfully to Junior Fliegenstockenstien, "I enjoyed meeting you so much. It's such a pity that you have to leave after Shabbos. Why can't you stay a little longer?"

Junior Fliegenstockenstein replied, "We can't. My mother is a principal and she has to go back to work."

Other Boy asked, "Where is your mother a principal?"

I was only listening with half an ear; I was busy swinging Dovi. My esteem for Madame Fliegenstockenstein rose; so this refined, intelligent woman was a principal! Wow. I wondered in which Boro Park school.

Junior's answer startled me to pieces. I nearly fell over.

I had never met the principal of EEC. I only knew her by her first name: Chana Mindel.

And she was there, at the hotel, in the flesh.

At once I was fascinated and indignant.

So Chana Mindel had been sitting the entire Shabbos, listening to my stories, watching Dovi quietly. She knew who I was. She knew who he was. And she had not bothered to introduce herself to me.

Had I not overheard that conversation, I could have gone home after that weekend never knowing that I had spent a weekend with the principal of EEC.

The same principal who had refused to accept Dovi into her EI program.

When Chana Mindel woke up from her Shabbos afternoon nap and came to the  dining room for the afernoon meal, I confronted her - respectfully.

"I'd like to clear something up with you," I began. A slow smirk spread across her face. She knew. "What's your name?"

"Oh my gosh!" I screamed. "So you're Chana Mindel - the principal of ECC who didn't want Dovi to attend!"

We had a really sweet conversation after that. Yes - she had recognized Dovi right away from the times we went there for OT. She hadn't said anything to me - because she has a very strict rule about not introducing herself to EEC parents, as many of them are self-conscious and private about their special needs children. Obviously, I was not in that category at all, but she still stuck to her principles. As to why she hadn't admitted Dovi into her program - she told me quite frankly that her school is not made for autistic children, and it would not give Dovi what he needed. It was true; Dovi would not have made any progress at all had he attended EEC. They actually had just hired a teacher who was trained in Dr. Greenspan's FloorTime technique and she strongly urged me to look into it for Dovi; but we were all set to start TABAC on Tuesday and I wasn't going to upset the apple cart at this late stage - plus I didnt want Dovi to be part of a new experiment which had the potential of failing. (Eventually a few months later I spoke to a mother who had sent her autistic son to that program and he grew a lot socially and academically but his behavior remained abysmal, as FloorTime does not address behavior issues at all.)

I forgave Chana Mindel wholeheartedly for the whole story. But whenever I remember that Shabbos, it elicits a chuckle. It will forever remain imprinted in my memory as the Shabbos I almost didn't meet the principal of the Early Education Center.

Forgive me for doing this, but from this point on, I will be posting the Donate button in every post. Please, if you can, make a small donation to Dovi's Educational Fund. At this point we are barely at the quarter mark for his lawyer's retainer - nevermind the actual costs of his tuition. We need tens of thousands of dollars!!!