When Dovi was a baby, he sat in the Graco Evenflo high chair he had inherited from big brother Chaim. I loved the thing; it had two holes on the tray where we could put in toys from the Exersaucer line which kept him busy during mealtimes and playtimes. Eventually the high chair became a space annoyance and Chaim was big enough to sit on a regular kitchen chair, so Dovi inherited Chaim's Fisher Price Booster seat. I loved the booster seat. When I had first bought it for Chaim, it came with a play tray  that had a battery operated "book" with sounds and activities on it. Unfortunately that play tray spent way too much time on the porch and got wet from many years of rains and no longer worked. So now we were just left with the booster seat and a plain blue plastic tray. But it served the purpose well.

That is, until Dovi entered the "food flinging" stage. Now the tray was way too small to contain his food choices which were endless, varied, and picky. He developed an annoying and dangerous habit of pushing himself towards the table to grab and fling stuff; he would move the ENTIRE CHAIR that the booster seat was strapped to. Sometimes he pitched himself backwards out of anger and was in danger of tipping the whole thing over. It was clear we needed a safer solution.


One winter's day I was at Amazing Savings, and there, leaning against the wall were some unassuming white cardboard boxes. Inside they had a cheap, Chinese imitation of the wooden restaurant high chairs.

I bought one, brought it home, and put it together with Chaim's able-bodied assistance. True, we could no longer put food down on the tray, but that meant Dovi couldnt fling his food everywhere either. We were able to strap him in, and he didn't move the entire chair around the room or tip himself over. The high chair serves us well for a long time; it was the place we kept Dovi tethered during his upsherin as well. But at some point, when he was over 3 years old, it didnt serve its purpose anymore, as he kept climbing out of it. We were out of solutions. 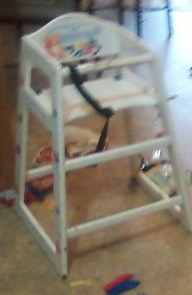 For a few days we strapped him into a car seat which we mounted on a chair with a long scarf or something. He liked sitting there, booster seat style, but the car seat was getting dirty and I didn't know how safe it was to do that long term. So the search continued.

It was during a routine YomTov visit to my in laws when we found the solution. My sister-in-law was visiting from out of town, and she had brought a high chair with her. It was the simple, original Prince Castle high chair my mother had still used with my own siblings. It was now being marketed as the Unique Baby high chair, but the features will still the same. We put Dovi into the high chair during the meal and were shocked how happy, safe, and well behaved he was in it.

A day after Yom Tov I went to my local juvenile furniture store and got one for myself. Dovi fell in love with it right away. The tray is large, the seat is comfortable, and although he climbs out of this as well, it's definitely a better solution than the wooden high chair or the booster seat. He can sit there for a long time, even just to watch Uncle Moishy. 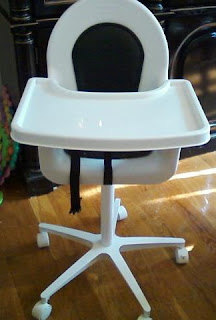 At present, Dovi still uses this high chair - but we recently brought the Fisher Price booster seat back up from storage, to be used during the family Chanukah parties. At least year's parties he was all over the place and it was extremely stressful. We were surprised how excited he was to his booster chair, and he doesn't move it around the room like he used to, because we now live in a bigger house with more room around the table and he can actually sit near the table.


I spent months and months researching high chair/feeding solutions for active children like Dovi. There are other, extremely expensive solutions like the ones found on Adaptive Mall. But thanks to the amazing teachers and therapists at TABAC, Dovi is today able to sit more calmly and purposefully during mealtimes and make less of a mess than he used to, and the regular mealtime solutions used for neurotypical kids work for him so far.