I wrote this post on Sunday, but waited a few days for Hanna Andersson to approve me as an affiliate. After a few days I finally called them and went through a whole wild goose chase until I got to the right person and I got approved. I was so excited about this post because it is my first *real* Affiliate post and it's a pity it took this long to go up; in the meantime I had my school interview and raising money for Dovi's schooling took front and center so I pushed off posting this. But I'm still excited about this post and I hope it can help mothers of other kids who abhor shoes.

When ASD was born, he wasnt alone; he was born along with his triplet sisters, SPD and ADHD. And no, I'm not referring here to Asher Sam David and his sisters Sarah Patty Diane and Audrey Deena Helen Danielle. I'm referring to Autism Spectrum disorders and the twins Sensory Processing Disorder and Attention Deficity Hyperactivity Disorder. The three generally go hand in hand. They are very often joined by a Seizure Disorder, which luckily -knockonwood- is not the case here.

But Dovi's got SPD and ADHD BAD.

The ADHD reared its ugly head a little later; at this point in the narrative Dovi was still relatively well behaved, about as well behaved as a typical 2 1/2 year old. But the Sensory Processing Disorder is what preceded the autism; he was stimming as early as 17 months old. Grunting noises, checking out his fingers, eyeballs, ears, you name it. He was a sensory seeker instead of a sensory avoider. Rubbing himself on floors, needing to squeeze and touch things all the time, and so forth. I didn't know about any of this though, nor what it all meant.

Dovi's meltdowns and tantrums were also as a result of his sensory processing disorder. You know that stage of infant/toddlerhood where you wish he would talk already? Where he wakes at night and cries and cries and you just don't know what's wrong? We all hate that stage and breathe a sigh of relief when the toddler turns 2 or 3 and begins to talk, finally.

Well, Dovi is still in that stage. Whenever he is in pain, the guessing game begins. Is it his ears? Teeth? Is he uncomfortable? Are his shoes too small? Does he want a drink? Is he hungry? It's unnerving.

By now, at age 4 1/2, I have learned to read his mind and figure out what he wants. He also has stopped the crying-for-no-reason stage quite a while ago and is once again the Happy Chappy we knew and loved. He has learned to sign for food and drink and we don't have to guess so much anymore. But at that point,  it was so frustrating and annoying when he entered one of his meltdowns and we could not pinpoint what was making him so uncomfortable.

Of course, now we know that he simply had some sort of sensory overload. I have learned by now to give him deep pressure massages, strong hugs, or some other method of comfort. I remove him from noisy situations and provide him with familiar objects when we are away from home. But it was a learning curve.

Even once Dovi started his therapy in the basement, he had a lot of crying fits and unhappiness. Helen, his incredible Lead Therapist, tried her best to figure out what ailed him. After a short time she told me something stunning; she had put her hands on Dovi's ears and gave them a squeeze. Dovi latched onto this like a drowning man. putting Helen's hands on his ears over and over again, begging for a squeeze.

It hit us like a thunderbolt. The ears are the cornerstone of the Vestibular system. Dovi obviously felt a sensory dizziness, a sensory vertigo if you will. When his ears were squeezed to the point of suction, he felt massive relief. It's hard to explain and even harder to understand, but it worked for Dovi. And it shocked and saddened me.

How long had the poor sweetheart suffered until we figured out this little bit of information?

The guessing game with Dovi often feels like Noah in the Ark with the Lizard. There's a Biblical Tale of Noah with some kind of lizard - was it the chameleon? who turned down every kind of food offered - fruits, veggies, meats, seeds. Noah felt terrible, having tried everything. Once Noah was standing at the lizard's cage in desperation, peeling a pomegranate. A worm slithered out of the pomegranate and the poor lizard jumped at it, sticking out its long tongue and grabbing the worm. "You poor lizard," said Noah, relieved. "Now I finally know what you like to eat."

I had that with Dovi all the time, until with practice, and with improvement in his communication skills, I started being able to read his mind and know what he was trying to do or obtain. But until that day came, I often felt like Noah and the Lizard. I still feel that way when it comes to food; we'll try 10 different things for breakfast, lunch and snack, and he will fling all of it away. The amount of food that goes to waste here daily due to his food swings is mind boggling.

Dovi's main sensory dysfunctions are with his proprioceptive system. His vestibular issues are largely resolved by now; he no longer needs to be in constant motion and rarely asks to have his ears squeezed. But he still needs a lot of deep pressure massages, weights, etc. He basically has a very hard time with sensory regulation. His sleep patterns used to be disastrous; waking up at 1 a.m. and remaining awake for the rest of the night were not uncommon. I will describe in a later post how that was largely fixed by now.

Despite - and perhaps because of - his sensory seeking ways, Dovi has one quirk, which is basically synonymous with autism spectrum disorder - he absolutely abhors wearing shoes and socks. He never wears them. It is a battle to put his shoes and socks on, a battle to keep them on, a battle to find them every day. Perhaps that is because he can't tell us when his shoes are too small, and taking him to the shoe store is a Xanax event, which I avoid at all costs. (Along with going to the pediatrician, dentist, and frankly anywhere else.) In the stroller he promptly took them off and flung them to the furthest corner of the earth, along with any blanket I employed to cover his little piggies. If I had a nickel for every person who stopped me on the street to comment on his missing footwear, I'd be a millionaire! I tried to put them back on once or twice, but eventually would give up and simply pile it in the hood of his stroller...

Once I bumped into an acquaintance who, of course, commented on his bare feet. I rolled my eyes and sighed, but came down with a thud at her next words: "Why don't you put on tights under his pants? That's what I do with my babies who pull their socks off."

What a brilliant idea! It hadn't occurred to me! For the rest of the winter Dovi wore warm tights under his pants, and I no longer had to worry about him getting frostbite or pneumonia. But when summer rolled around, the old problem was back. Tights did not make sense with shorts; I didn't mind when he ran barefoot on grass or sand, but on concrete it posed a safety hazard. I recalled those sock-shoes I would put on his feet when he was smaller, but those only come 'til size 24mo. There HAD to be an alternative for older children!

After lots of googling and researching, I hit paydirt with Skidders Sock Shoes

. They come in all kinds of styles and colors and go up all the way to size 12 in some cases, although I see they are sold out in a lot of styles in the bigger sizes

. My favorites are the ones that look like a lace up shoe

, although I also bought a few other styles, such as the sports one

,  I see they also have some really cute girly styles

The slipper socks are non-skid and are comfortable inside, with a little insert to absorb sweat and foot odor. We did find 2 downsides to these slippers, however; since Dovi tended to get them dirty we had to wash them often, and they tended to shrink a little in the wash. Often we would lose the insert and it was uncomfortable without it. Since we liked having so many different styles, if we lost half a pair the other half was useless. Dovi looked very cute in them though, and they served an excellent purpose, so we continued using them until he was about four years old and they were no longer fitting him right.

When Dovi turned four and we went off the country again, I knew we needed something new for his inevitable bare feet. The Skidders Socks didn't fit him that well anymore. So with a little bit of further research I was delighted to discover the Swedish Moccasins

by Hanna Andersson. They wear well and go up to size 3-5! They seem to be out of stock on some of the sizes right now, but I was still able to buy 2 pairs of navy size 10-12 today. The one negative about the moccasins are that the thread holding the shoe and sock together seems to tear often, since Dovi wears them almost daily, and on the pavement, so they get dirty and wear out fast. 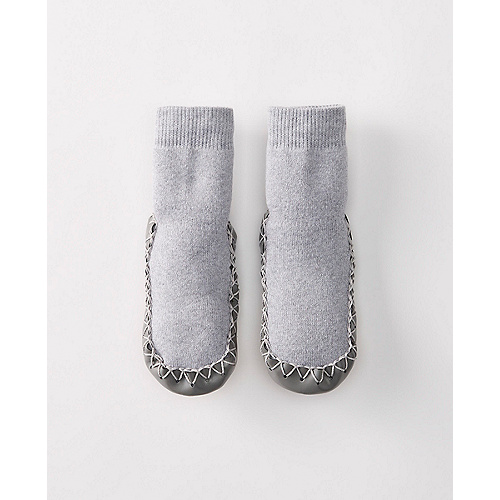 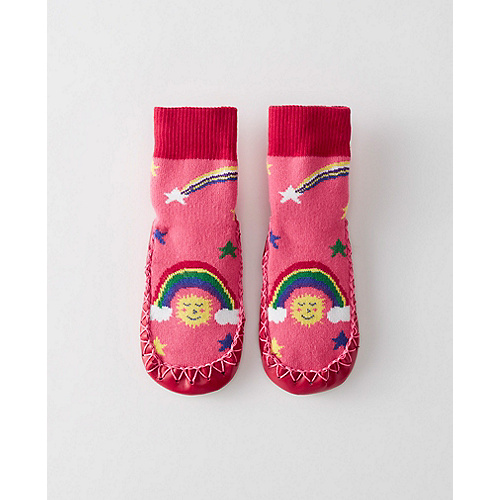 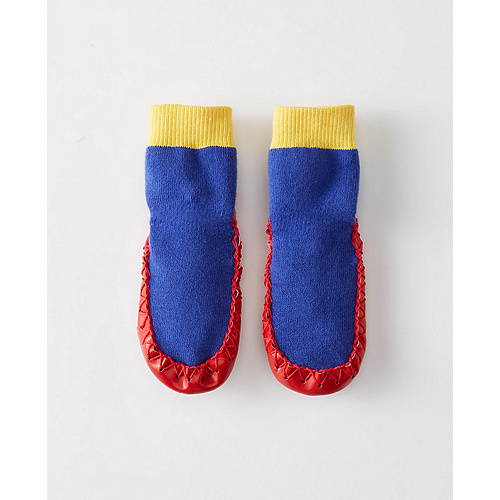 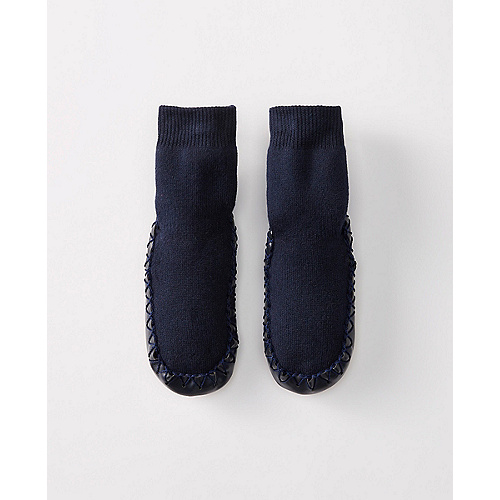 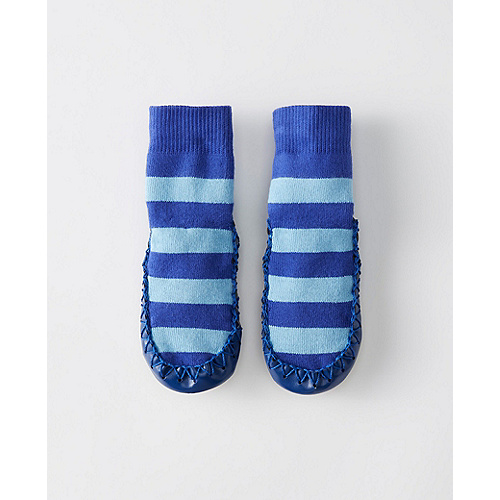 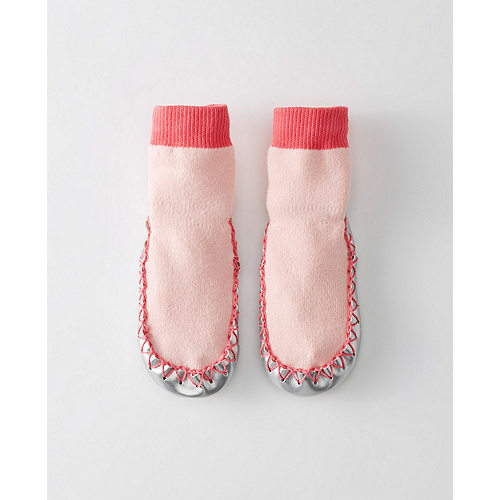 Oh, the life of an Autism Mom. Research, research, research day and night. But I'm thankful and lucky that solutions exist to almost any issue an autistic child has. Except, of course, for an actual cure.

I will explore solutions to his other sensory needs in later posts - oral, vestibular, proprioceptive and tactile. For now, I hope the links in this post have helped at least one person, at some point - even if months from now.
at 6:10 PM